As we all know, we use our jewels and accessories to ornament our bodies and make us feel more attractives, elegants, desirables and sometimes with certain social status. There are an exorbitantly, expensive and at the same time incredibly beautiful jewels in the world, while you read and see this awesome top 10 and their stories, you will be breathless.

The jewels, to be considered as that, must be made of precious stones or gems, this are minerals carefully cut and polished impeccably, this is considered a true work of art, at the same time the precious metals are implemented, those metals are the one they find in pure state in nature, not combined with other elements (the most outstanding, as we already know is gold, silver, platinum). The union of these unique minerals combine with delicacy and mastery, creates these majestic jewels that I present to you next.

A magnificent ring, the star protagonist: the intense pink diamond of rectangular shape that weighs 14.23 carats, flanked on each side by a diamond of rectangular shape that weighs 1.73 and 1.67 carats, mounted in white gold and rose of 18 carats. Since they were discovered for the first time in India, pink diamonds have been considered among the most beautiful gemstones.

It is particularly rare, because less than 10% of all pink diamonds weigh more than 0.20 carats, at the same time its color is simply pink, unlike others diamonds that shows some traces of purple, orange or gray elements. It was sold in Hong Kong in 2010 for $ 23,274,064.

It is the largest and most impeccable blue diamond in the world, initially acquired by Harry Winston, a famous American jeweler. (A curiosity about thing this character… he donated to the Smithsonian Museum the famous Diamond Hope, (also known as Blue Diamond or Cursed Stone) it was believed that this jewel had a curse, it served as inspiration to create “The Heart of the Sea”, necklace with a blue diamond carved with the shape of a heart, given to Rose DeWitt Bukater (Kate Winslet) by Cal Hockley (Leonardo Dicaprio), in the movie Titanic).

The history of this diamond is shrouded by mystery, although most experts are agree, the diamond was probably mined in South Africa, Where the majority of the blue diamonds are extracted.

It may be on the 8th place of this rankings, but this watches are the most expensive in the world. In total, they contain 874 diamonds of various sizes, the biggest weighing 15 carats. Even more surprising is the mechanism that allows three larger diamonds to move, revealing a dial. The Chopard company is known for its products and for the elite.

It was commissioned by American tycoon Frank Winfield Woolworth, father of Barbara Hutton to Cartier jewelry as a wedding gift to his daughter with the Prince of Georgia, Alexis Mdivani. The garment has 27 beads of 15 millimeters of diameter, carefully carved and a translucent and hypnotic green color, these beads previously belonged to the Chinese imperial house in the 18th century. Tha Jade was an exclusive symbol of the ruling classes in China and the necklaces of this stone were used only by the emperors and their families.

The design made by Cartier incorporated a brooch of rubies and diamonds that gave the jewel an Art Deco style in keeping with the avant-garde trends of the early twentieth century.

This piece was made by the designer Susan Rosen and Steinmetz Diamonds (one of the most famous houses and with the best diamond creations for more than 7 decades) for the Sports Illustrated magazine and modeled by the American actress Molly Sims in February 2006.

Its weight is more than 150 carats in diamonds, including a pear-shaped diamond of 51 carats, an emerald cut of 30 carats, a pair of circular diamonds of 15 carats, another in a pear’s shape of eight-carat and to top it off these stones are set in platinum.

As for jewelry, there is also the most expensive bra in the world produced by Victoria’s Secret. Valued at 3 million dollars, the name, Fantasy Bra was made with diamonds and emeralds, collecting 9 thousand precious stones.

It is important to note that colored diamonds are very unique, among 10,000 diamonds extracted, the possibility that there is one of this type is 1, ie 0.3%. The diamonds sent for the classification, just a few have the pure electric blue tone to guarantee a Fancy Vivid rating, a very rare color quality and quite difficult to reach for blue diamonds.

About the origin of this extremely rare pink diamond weighing 24.78 carats, very little is known, has been described as “one of the best diamonds ever discovered.” It was purchased for the private collection Harry Winston, famous American jeweler in 1950 and then sold to Laurence Graff, another English collector and jeweler.

The diamond, mounted on a ring, is accompanied on both sides by two colorless diamonds weighing 1.73 and 1.67 carats, the three rectangular diamonds are set to a pink and white gold ring of 18-carat. It was sold by auctioneers of Sotheby’s in Geneva, Switzerland, on November 16, 2010, before the auction it was expected that the stone would enter the list of the ten most expensive diamonds in the world; its price of US $ 46 million, turned it into the most expensive jewel ever sold in an auction until that moment.
.

Despite of being in the third place in the ranking, this diamond necklace, is listed as the most expensive necklace in the world, known as “The Incomparable”. It was created by the famous company Mouawad. It is a huge yellow diamond pendant, similar to the size of an egg, weighing 407 carats, suspended by a rose gold frame and decorated with 90 smaller white diamonds weighing 230 carats. This necklace was completed in the year 2012.

The story of its appearance is even more surprising. In the 80’s, this diamond, which weighed 890 carats, was found by a little girl, who played among the rubble of mining, she gave the stone to a relative and that person sold it to a merchant; These types of anecdotes are explain why this jewels even more valuable and desirable.

This stone before being part of the necklace of the Mouawad, was exhibited in the Smithsonian Museum, in Washington DC. The first appearance as a necklace was at the Doha Jewelry and Watches exhibition in 2013, Qatar. 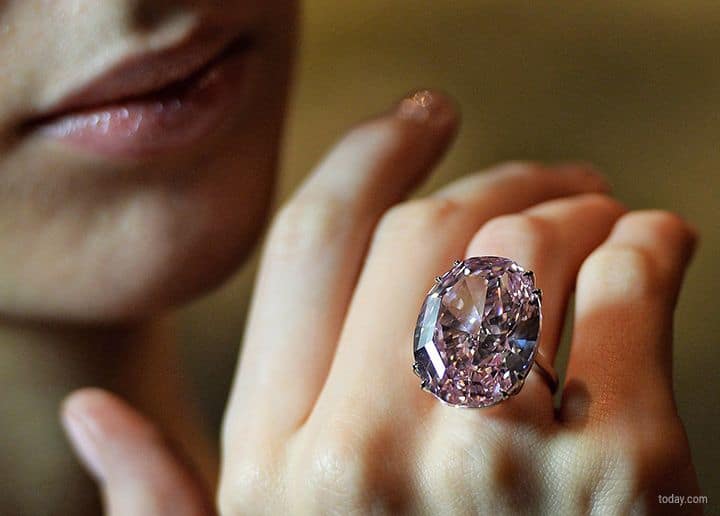 A large oval diamond weighs 59.6 carats. This diamond was cut from a bright crude weighing 132.5 carats, which was extracted from “DeBeers” in Africa. Jewelry experts say that its size and quality outweigh all that existed and existing diamonds in private or real collections around the world.

Like Graff Pink, this ring also belongs to the Laurence Graff collection.

The history of this colored stone “Fancy Deep Blue” has not been studied until the end. It is presumed that it was found in the Indian kingdom of Golconda, where the diamond was purchased by the Spanish King Philip IV as a dowry to his daughter. Later, the diamond appeared in Augsburg at the Wittelsbach House, which is a European Royal House and a German dynasty originally from Bavaria.

In 2008, it was auctioned in London and acquired by jeweler Laurence Graff, who bought the jewel and has begun to modify it, Graff eliminated almost 4.5 carats of blue diamond clean in it and the value increased. In 2011, Graff Wittelsbach sold the diamond to a member of the royal family of Qatar for 80 million dollars.

Particularly I consider that the most wonderful of these gems are their stories, I do not mean the geology part, which is certainly interesting, it is obvious that without all those natural processes, today any of these gems exist, either miners, merchants, or jewelers who tooks the labor of embellishing and enhancing even more the attributes of these incredible pieces of nature and be immortalized through time by humanity.

I wonder how many interesting stories will be behind those gems? or how many more will the future? I imagine that there are and will be hundred of secrets surrounded by love, passion, curses and of course greed … Do you have any jewel with history that has transcended through time and generations? What kind of value do they have? Monetary or sentimental? … What is the most important thing for you?